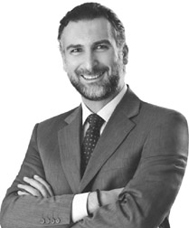 People working with Mr. Walid Tahabsem distinguish him by his “unrelenting focus on quality and efficiency combined with a genuine concern and commitment for all those who work with him”. These attributes have been hallmarks of Mr. Walid Tahabsem’s career. Representing true Jordanian entrepreneurship and success in the IT sector, Mr. Tahabsem is a well-rounded business leader equipped and driven to turn challenges into opportunities.

After receiving his B.Sc. in Computer Science from Yarmouk University in Jordan, he founded Integrated Technology Group in 1989. Today, Mr. Tahabsem leads one of the most successful IT companies offering quality end-to-end products and services for the education and public sectors in over 20 countries worldwide.

Through the combination of his passion for technology and vision, Mr. Tahabsem was able to grow ITG not only in terms of size, geographic representation, and revenue but also in terms of technological innovation and the application of technology in various fields. His innovations include the development of the first Arabic Artificial Intelligence Parser, the creation of an Electronic Data Interchange solution, and EduWave®, one of the top education solutions, currently holding one of the largest bases of countrywide deployments and users worldwide.

Mr. Tahabsem not only served on the Prince Hamzah Bin Al Hussein School Board and Jordan’s ICT Advisory Council but is also a Board Member of the Jordan Strategy Forum (JSF). Moreover, he has been an active Board Member of Endeavor since 2013, where he is also Chairman of the Board, due to his belief in the active role Endeavor plays in enhancing the country’s entrepreneurial ecosystem. Additionally, Mr. Tahabsem serves as Chairman of Beyond Capital, which promotes the entrepreneurial ecosystem in Jordan through comprehensive support. Mr. Tahabsem is a member of Advisory Council of the National Initiative 1000 Entrepreneurs and also a co-founder and Board Member of Oasis500, the region’s premier education and counsellor-driven seed investment program. In addition, he is an active member at the Saudi Al-Aghar Think-Tank, a nonprofit and independent think-tank aiming to transform Saudi Arabia into a knowledge society.

Mr. Tahabsem is a Board Member of Naua, an initiative run by the Crown Prince Foundation, designed to increase charitable work and develop a sense of community responsibility. He is also a board member of the National Tourism Council and at the Military Credit Fund.

In recognition of his outstanding efforts and leadership in the Information Technology and Education sectors in Jordan, Mr. Tahabsem was awarded the Order of Independence by His Majesty King Abdullah II Bin Al Hussein in 2015, becoming the first Jordanian honored in this category. He has also been granted a membership certificate from the Aal Al-Bayt Institute for Islamic Thought in recognition of his scientific and technical efforts.